The University of Maine at Presque Isle Library has received a gift of about 150 books, with more coming, about World War I thanks to a generous donation. Officially named the Nick Fowler Collection after the original owner of the books, the collection greatly increases the breadth of the library’s offerings on the subject of World War I.

“The Library at UMPI is very grateful to be selected as a permanent home for this extraordinary collection on World War I,” Roger Getz, UMPI Director of Library Services, said. “The books not only offer a cultural and historical perspective of the Great War, but also take the readers into this time period that has so influenced our society today. The request for the books to be a part of our circulating collection is quite unusual for the quality of the collection. The collection will be available to all citizens in Maine and beyond through borrowing privileges and inter library loan. We cannot thank Mr. Fowler and Dr. Zillman enough for their generous gift to our library.” 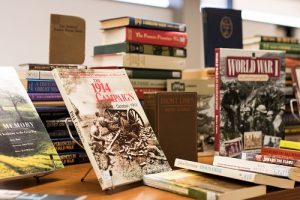 The books came to UMPI in a somewhat unexpected way. Former UMPI President Don Zillman first connected with Fowler during one of the readings of his book Living the World War, a two-volume study of the American experience in World War I. Zillman spent several years working on the books, which he co-authored with Elizabeth Elsbach, a 2016 University of Maine School of Law graduate, Zillman’s former research assistant, and a European History major. Comprising more than 1,200 pages, the books draw on reporting from the New York Times and daily debates in the U.S. Congress to show how events unfolded from the perspective of those who lived through them.

In speaking with Fowler about their shared interest in the Great War, Zillman learned that Fowler had about 200 books on WWI that he was willing to give away. Fowler, a long-time medical professional in the Portland area, was retiring to Colorado and couldn’t take his collection with him. After selecting some of the books to keep and offering some up to the University of Maine, Zillman offered the collection to UMPI. 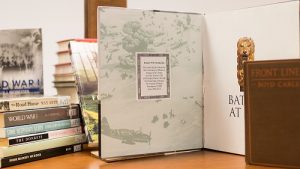 “We are so appreciative of Nick’s gift,” Zillman said. “The centennial of the World War reminded us of how central those years were to the America of today. I’ve had the pleasure of reading all of the books before passing them on to the permanent collections at UMPI and UMaine. Nick’s talent for selection is uncanny; there hasn’t been one that hasn’t been informative and riveting.”

A distinguishing feature of the collection is that many of the books feature British authors, subjects, and publishers. Now on the shelves at the UMPI Library and with special labels indicating that they are part of the Nick Fowler Collection, the books are ready for another generation of researchers and history buffs to explore.

For more information about the Nick Fowler Collection, or to learn how you can make a donation of books to the UMPI Library, contact Getz at 207-768-9595 or roger.getz@maine.edu.