One hundred and seventy-nine students graduated from the University of Maine at Presque Isle on Saturday, May 11, during the 2019 Commencement Exercises—the University’s 110th Commencement ceremony. UMPI President Raymond Rice conferred degrees for the 2018-2019 academic year upon 112 students who participated in the ceremony held in Wieden Gymnasium.

Maine State Representative Harold “Trey” Stewart, who is one of the youngest legislators in the nation currently serving in a senior leadership post, addressed the graduates as this year’s commencement speaker. During the graduation event, Mr. Daniel Ladner, a well-known and much-loved educator and advocate for music and the cultural arts, was presented with an Honorary Doctor of Humane Letters Degree. 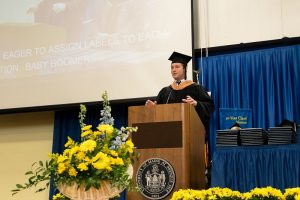 Rep. Stewart has twice been elected as the youngest currently serving member of the Maine State Legislature. In 2016, he successfully ran for a two-year term in the Maine House of Representatives, and in 2018, he was re-elected to the Maine House and elected by his caucus peers to serve as the Assistant Republican Leader in the House. Rep. Stewart is a third generation native of Presque Isle and graduated from Presque Isle High School in 2012. He attended the University of Maine and graduated in 2016 with a degree in political science and sociology. He then completed an MBA from UMaine during his first term in office. Rep. Stewart is a member of the Presque Isle Rotary Club, the Masonic Lodge, the Central Aroostook Chamber of Commerce, and serves on the boards of The NMCC Foundation, the Aroostook County Action Program, the University of Maine Alumni Association, and the UMPI Board of Visitors. 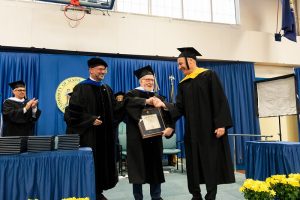 Ladner has made many contributions to the County and to UMPI throughout his life. A 1959 graduate of the Aroostook State Teachers College (now UMPI), he enjoyed a 40-year career in education, directing the high school chorus and drama club and helping found the Shipmates Playhouse at Presque Isle High School, producing numerous Broadway musicals at the Caribou Performing Arts Center, and serving as a judge for state drama festivals. He was a driving force with UMPI’s Pioneer Playhouse, a founding member of the Presque Isle Community Players, and a longtime Rotarian with the Caribou Rotary Club who has been named a Paul Harris Fellow by both the Caribou and Presque Isle Rotary Clubs. He has served as the director of the Caribou Choral Society since 1977 and has been the long-time organist and choir director at two Presque Isle churches. Among his many accolades, Ladner was named the Citizen of the Year by the City of Presque Isle in 1988, the recipient of the Spirit of Caribou award in 1997, and the recipient of the Lifetime Achievement Award from the Presque Isle Chamber of Commerce in 2004. He has twice received UMPI’s Distinguished Alumni Award.

During UMPI’s commencement exercises, Samuel W. Collins, of the University of Maine System Board of Trustees, delivered greetings on behalf of the University of Maine System. As well, Stephen Richard, UMPI Board of Visitors Chair; Carolyn Dorsey, UMPI Faculty Assembly Chair; and Tom Wire, UMPI Alumni Association President, offered remarks on behalf of each organization, respectively. In addition, Timotheus I. Peace served as the Class of 2019 Commencement Speaker.

“On this most auspicious of days, we commend the Class of 2019 for their dedicated pursuit of their academic goals,” President Rice said. “Whether they’ve taken a traditional path to their degrees, come back after a long time away, or undertaken their college work later in life, these graduates have accomplished so much in their years with us. While many have juggled family schedules, jobs, and other responsibilities, our graduates have succeeded in completing this part of their educational journey and we are incredibly proud of their achievements.”

This year’s Commencement was live streamed on the University’s website so family and friends who couldn’t attend would have the opportunity to see the Class of 2019 graduate. Viewers from around the world were expected to tune in for the ceremony.

A tradition at this year’s event was the pinning of all marching graduates with a special symbol of campus. Each graduate was given a lapel pin depicting a snowy owl with its wings outstretched in flight. Meant to symbolize how each of them is spreading their wings and soaring on to great heights, graduates were asked during Commencement, “Where will your wings take you?” They will have the opportunity to share their stories—about contributions they make in their career fields, ways that they serve their communities, and adventures that they have around the world—on the website www.umpi.edu/yourwings. All alums, not just this year’s graduating class, are encouraged to add their stories on this site.

A reception for graduates, family, and friends was held in the Campus Center immediately following the ceremony.