UMPI Class of 2013 Bachelors in Psychology 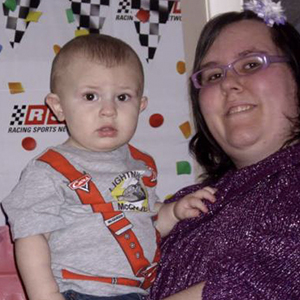 ” My name is Amanda (Harrop) Chambers and I graduated from UMPI in December 2013 after 4 and a half years that were interesting, to say the least. My story is unlike most students. In May of 2009, I graduated from the Maine School of Science and Math and picked a well-known specialty school on the East Coast to attend in the fall of 2009. I went to accepted students weekend and immediately discovered it was not a good fit for me. I began researching other schools and had remembered my high school signing a memorandum with UMPI so I figured I would apply (even though it was just a week before classes were to begin). Needless to say, I got in in 4 days and moved in in another 2! I will never forget that ride to the County because I felt so at peace and when I finally arrived on campus I knew UMPI was the place for me, that I had found my niche. I quickly became involved in Campus Crusades as well as the National Honor Society chapter and partnered with the resident advisory council. I spent my weekend studying and volunteering in the community and went to New York City and Georgia with Team GPS through Campus Crusades. Academically, I discovered the thing I loved most about my education classes was the psychology behind the topics we were studying so I made the decision to switch my major to Psychology and kept education as my minor. After a year (yes a whole year, I took summer classes as well and maintained my campus job as a computer lab tech) I began feeling burnt out and made the tough decision to take a semester off. Yet, the whole time I knew I would return to UMPI and I was determined. Well, in the fall of 2010 (while I was on my leave of absence) my now-husband-then-boyfriend proposed. I was faced with the challenge of “how the heck am I going to plan my wedding 6 hours away from where I am having it”. I was in near constant communication with some of my professors and various offices on campus and together we agreed online classes were a viable option. I had taken a few over the summer but I was admittedly nervous about completing whole degree requirements online. After my first semester, I found a good rhythm and by then I had established routes…6 hours from UMPI. So when it came time to enroll in classes for summer 2011 and fall 2011 I once again did so online. And that’s when things got really tough! A few requirements were not going to be offered in time for me to graduate on track. I was in panic mode and reached out to my advisor (Allen Salo) as well as the Dean of Students and President of the University. I advocated for students like myself who wanted to be able to complete a degree while working while building a life. The result…I was cleared to take online courses from ANY UMaine campus and I saw an increase in online course offerings over the next 2 years and that degree that I worked so hard for and wanted so bad? Well, it took some finagling (I kind of had a baby on the first day of classes Spring semester of 2013) but I can proudly say I earned my BA in Psychology with a minor in Educational Studies, and graduated with high honors none the less. But I look back and realize I couldn’t have done it without some very wise, very helpful staff who bent over backward so I could keep going forward. Allen Salo, Jim Stepp, and Jannie Durr helped make my experience what it was. And here’s the icing on the cake: you know how there are all these rumors about how you cannot get far with your BA in psychology?…mine took me the full 8 hours back to the County and I now work for a local organization as a crisis counselor and I love every minute of it. My education is far from over, I will begin my MSW (online) in the fall of 2015, through UMaine. As for my time at UMPI though, I will forever be grateful for how they helped me accomplish so much.
If you need an education that is both affordable and dynamic, UMPI is the place to go. The staff and community are what really make the experience. There is never a wrong door and it’s a place where adversity is just a 9 letter word for a challenge that can and will be overcome. I will always be proud to be an UMPI owl :)!”