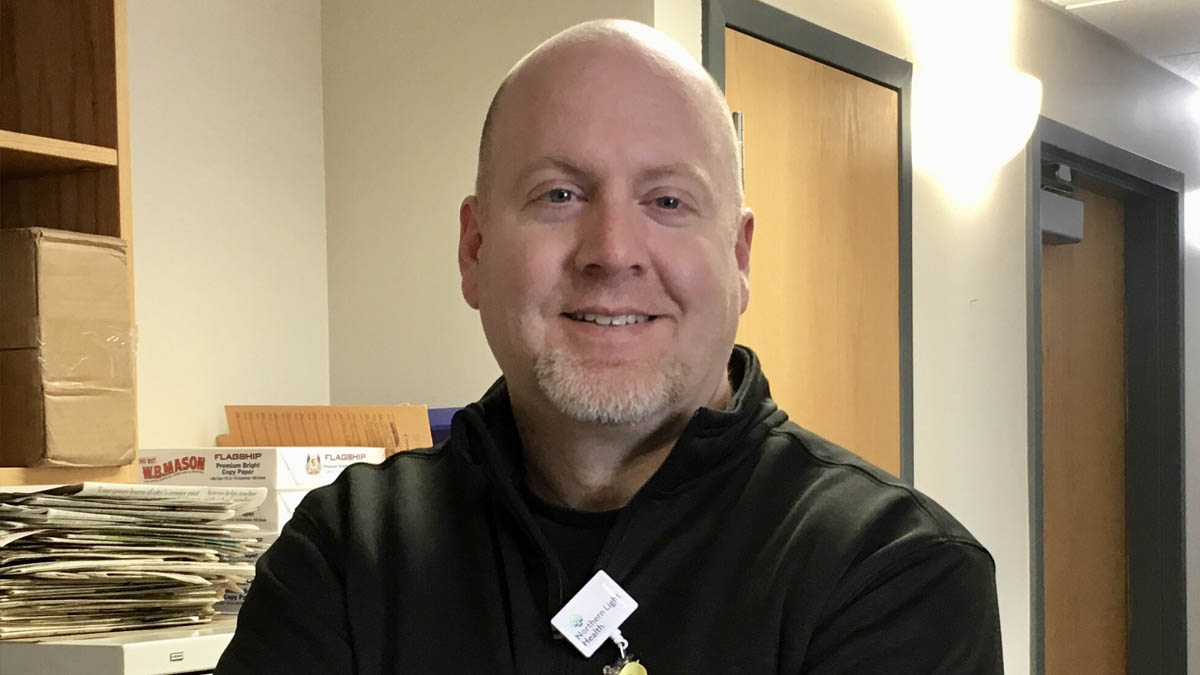 When an owl spreads its wings, it doesn’t have to go far to soar. This was the case for Brian Mosher, a 2015 graduate from the University of Maine at Presque Isle. Mosher had plans to soar from the moment he graduated from high school, but his wings took him in a different direction than he expected.

Coming back home to the county was not a hard decision for Mosher. “I always wanted to come back to my home area. I didn’t really leave. I went to school down in Bangor for a little while and then came back,” he said.

Little did he know that coming back home would be life-changing. It began when his daughter was born. “I had a family and thought about changing careers right around 2000–my first daughter was born in 2000. I was a stay-at-home dad for a couple years so I got out of radio,” Mosher said. “I stayed home for a couple of years with my firstborn and then decided I wanted to be a teacher.”

This is where Mosher began his journey toward UMPI but he wasn’t an owl yet. In fact, he wouldn’t be for several more years.

Mosher had a vision to be an educator and he always knew that he wanted to go to UMPI to pursue that dream. “UMPI’s reputation for the education department exceeded itself,” he said. Something about the small campus and small class sizes drew him in. He enjoyed the sense of community that a small college could offer him. After some thought, he decided to go to Northern Maine Community College and then transfer his credits to UMPI after two years. “I started at NM and I only took night classes. UMPI has a fantastic reputation for a teaching program, so my plan was to go to UMPI, so I started at NM.”

Sometimes when you have a family and a full-time job, you have to do what is necessary. Mosher knew this very well. “It took me five years to get a two-year associate degree,” he said.

Five years later, his career took an unexpected turn. With his associate degree still nearly crisp in his hand, he received a call. “As I was finishing that, the radio station downtown–Townsquare now–came to me–they used to be up on the Caribou road–said ‘we’re moving downtown and we’re changing formats and we think you’re the guy to run it.’ So here I was with my two-year degree planning to go to UMPI for teaching. This was a bigger radio company. I had a family. It was something I knew how to do. So I decided to take the job so I was program director down at Townsquare Media for eight years,” Mosher said.

Although Mosher enjoyed radio and had been in it for 25 years, the goal to be a teacher had never left his mind. “I think it was 2010-2011 I decided I’m going to go to UMPI to finish the teaching thing,” he said. “I started going back to school. My employer knew that I had plans and she was encouraging those plans.”

Life had not taken him where he thought it would. He’d left the nest and made one of his own, only to find that he was still meant to soar further. “I was always going to go to UMPI, but I just took a different route,” Mosher said.

Then one day he became the owl he was meant to be from the beginning. He knew that UMPI was an important part of, not just the town, but also him as a student. “Not everybody wants to move away,” Mosher said. “UMPI has a quality education at an affordable price. When I transferred to UMPI, I took a lot of classes and they were all great, but there was one instructor and one series of classes I took that changed everything for me–Wendy Ross. It was her style of teaching too. It was very conversational. Just very open. I really, really enjoyed that class–her as a teacher. Even to this day, she remembers me.”

As he was in the midst of pursuing his degree, another opportunity came to him. A job at Central Aroostook High School opened up and he applied. Mosher received the job on the spot.

At this point, he was advised to change his degree to English so that he could graduate early.

UMPI was the place he’d meant to be all along. It was a place he knew as home. UMPI had taught Mosher many things, but there was one specific thing that stuck with him. “When I was at UMPI, I learned it was OK to ask questions,” Mosher said. “I’ve been able to use that in my role at the hospital to try and find ways to streamline things, but never settling for the status quo. Always trying to make it better. Asking questions to find out other ways to do things. I think that comes from my time at UMPI.”.

Around the time of his graduation, he received a call from Northern Light A.R. Gould Hospital, which was known as TAMC at the time. They wanted him to join the team in media relations. Mosher has been working in that position since then.

To those looking from a distance, UMPI might just look like a university in northern Maine. To Mosher, UMPI was a community and a home.