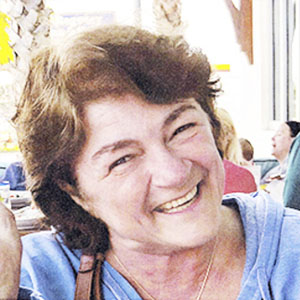 She was born in Van Buren on October 1, 1957 the daughter of Fernand and Edwina (LaFrancois) Thibodeau.

Marlene graduated from Van Buren High School in 1976 and later from the University of Maine at Presque Isle with degrees in Criminal Justice and Political Science. She had worked for Mountain Valley Job Training in Lewiston and later for The University of Maine, Augusta before taking time off to raise a family. She returned to work for James “Jim” Longley Jr. and then as staff for Senator Susan Collins for over 24 years, retiring in 2017. She worked part time for her husband as an administrative assistant, and served as an administrator for the Maine Aggregates Association.

She was an avid reader, enjoyed gardening, traveling and motorcycle riding. She was very devoted to her family and always had a special place for her friends at Pepper’s. Marlene was proud of her Acadian Heritage. She was a 15th generation Thibodeau, dating back to 1651. She also had a love of animals, especially her cat Nico, and her two dogs Ziggy Stardust and Lucy in the Sky with Diamonds.

She was predeceased by her daughter Marlee Johnston in 2005; and her father Fernand Thibodeau.

She is survived by her husband Ted Johnston of Fayette; her son Alec Johnston of West Gardiner; her mother Edwina Thibodeau of Van Buren; her siblings Bobbi Morrow and her husband David of Presque Isle; Claudette Cyr and her husband Gil of Auburn; Linda Chalou of Presque Isle; Michael Thibodeau of Freeport and Nola LaPlante of Hamlin; her nieces and nephews including Evan, Rudy, Renee, Aron, Marcel, Macie, Luke and Landon; as well as many great nieces, nephews, aunts, uncles and cousins.

There will be no visiting hours. A celebration of Marlene’s life will be held at 11:00am on Monday, November 4 at the Alfond Arena, Rt 17, Kents Hill.

Arrangements are in the care of Roberts Funeral Home, 62 Bowdoin St., Winthrop where condolences may be shared with the family on the obituary page of the website at www.familyfirstfuneralhomes.com.