University of Maine at Presque Isle President Ray Rice has announced that Maine State Representative Harold “Trey” Stewart will deliver the commencement address and Mr. Daniel Ladner—a well-known and much-loved educator and advocate for music and the cultural arts—will receive an Honorary Doctor of Humane Letters Degree during the University’s 110th Commencement Ceremony, to be held on Saturday, May 11, 2019.

“We are so pleased to have Trey Stewart and Dan Ladner join us for this year’s commencement exercises,” UMPI President Ray Rice said. “Rep. Stewart has served the State of Maine and the people of Aroostook County so well in his legislative and community leadership capacities, and has been an important advocate for northern Maine, both in the Legislature and through his board and club service in our local community. Dan Ladner has touched so many lives through his dedicated years of service as a local educator and proponent of music and the arts, and his decades of community service have helped to transform the County and beyond in so many important ways. Both work incredibly hard for this region that they deeply care about and both are inspiring role models for leadership. We are so pleased to connect them with this year’s graduates.” 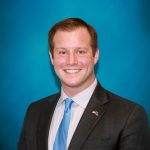 from Presque Isle High School in 2012. He attended the University of Maine and graduated in 2016 with a degree in political science and sociology. While there, he was heavily involved in a variety of groups on campus, was a member of the Alpha Tau Omega fraternity, and served as the President of the student body.

Rep. Stewart has twice been elected as the youngest currently serving member of the Maine State Legislature. In 2016, he successfully ran for a seat in the Maine Legislature—a two-year term in the Maine House of Representatives—and completed an MBA during his first term in office from UMaine. In 2018, he was re-elected to the Maine House and elected by his caucus peers to serve as the Assistant Republican Leader in the House. He previously served on the Education and Cultural Affairs Committee and is now serving on the Taxation Committee in addition to his leadership role in the State House. He is one of the youngest legislators in the nation currently serving in a senior leadership post.

Rep. Stewart is a member of the Presque Isle Rotary Club, the Masonic Lodge, the Central Aroostook Chamber of Commerce, and serves on the boards of The NMCC Foundation, the Aroostook County Action Program, the University of Maine Alumni Association, and the UMPI Board of Visitors. 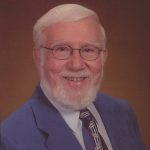 Mr. P. Daniel Ladner was born in Presque Isle in 1937, the son of Fay and Viola Ladner, and graduated from Mapleton High School in 1955 as valedictorian and president of his graduating class. He went on to study band directing at Boston University, but, after a semester, transferred to Aroostook State Teachers College (now UMPI) and graduated as president of his class in 1959 with a degree in education. He served as a fifth grade teacher in Presque Isle for 10 years and as an English and public speaking teacher at Presque Isle High School for 15 years after that. During his time at the high school, he directed the high school chorus and drama club and helped found the Shipmates Playhouse. He later worked as the Director of the UMPI Upward Bound program for five years, and for 10 years as the director of the Caribou Performing Arts Center, where he produced numerous Broadway musicals while also teaching drama and speech for Caribou High School.

Throughout his career and since his retirement in 1999, Ladner has been highly involved in his community. Between 1973 and 1994, he served as a driving force with UMPI’s Pioneer Playhouse, performing, directing, and supporting the local theater group in presenting more than 80 productions on the Wieden Auditorium stage. He starred in countless plays on campus, including the Centennial Homecoming dinner theater production in 2003, and directed the first musical in which now-famous, Tony-nominated actor John Cariani starred. He is a founding member and the first president of the Presque Isle Community Players, established in 1989. Ladner has also served as a judge for many state drama festivals at the regional and state levels, as host of County Tele Quiz—a high school quiz show that aired on WAGM in the 1970s and 1980s, and as a judge in the United Way of Aroostook’s Northern Star competition.

Along the way, he has received numerous accolades. He was named a lifetime member of the New England Drama Council in 1987, the Citizen of the Year by the City of Presque Isle in 1988, the recipient of the Spirit of Caribou award in 1997, the recipient of the first-ever Lifetime Achievement Award from the Maine Arts Sponsors Association, and the Lifetime Achievement Award from the Presque Isle Chamber of Commerce in 2004. He has twice received UMPI’s Distinguished Alumni Award, and the Maine Chapter of the American Choral Directors Association named him Choral Director of the Year.

He continues to serve as the director of the Caribou Choral Society, a position he has held since 1977, and as the organist and choir director at St. Mary’s Catholic Church and Grant Memorial United Methodist Church, both in Presque Isle. He also has been an active member of the American Choral Directors Association and the National Association of Pastoral Musicians. In addition, he has been a member of the Caribou Rotary Club since 2000, and has twice been named a Paul Harris Fellow, one of the most prestigious honors given by the international organization.

Ladner has been married to Barbara (Frick) Ladner since 1995. He has four daughters from a previous marriage: Tammy, Margo, Beth, and Allison, as well as seven grandchildren and six great-grandchildren.